Home > Politics > Hope and Resilience Amid Ukraine Invasion: “Throughout All of Europe, Ukrainians Unite” 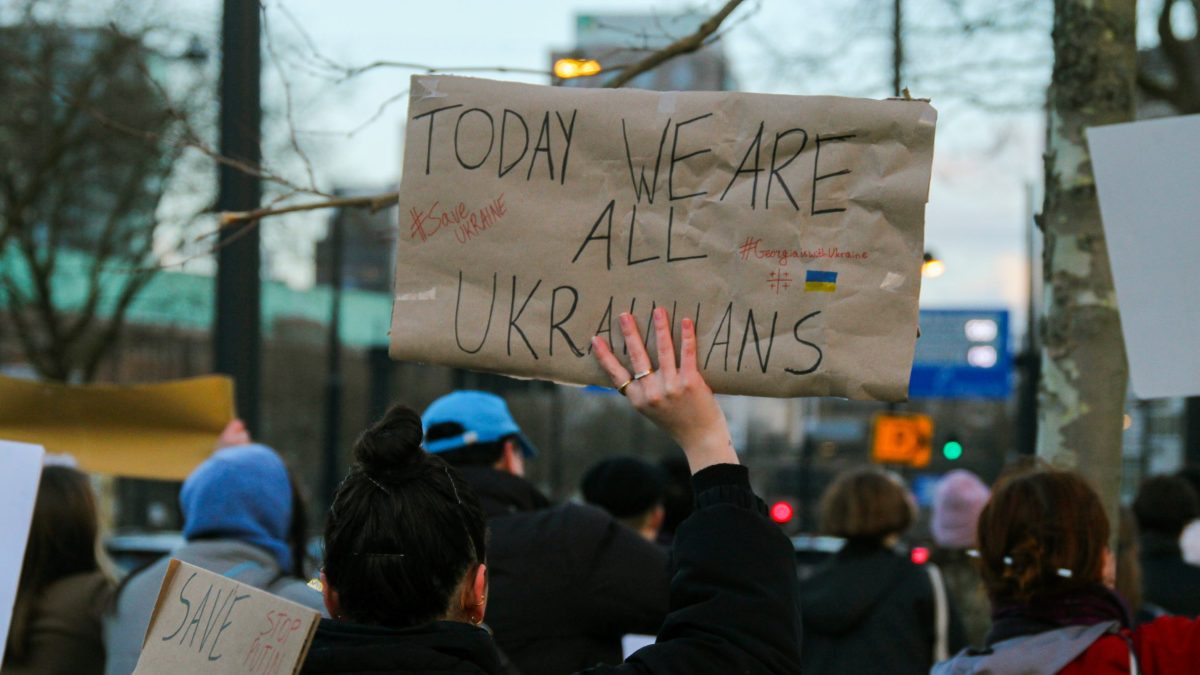 The Russian-supported military aggression in the east of Ukraine has already caused thousands of casualties since the beginning of 2014. Pro-Russian separatists, supported by Putin, waged war on Ukrainian regions in attempts to destabilize the country. Now, as president Vladimir Putin advanced his armies into a planned invasion of the country, it can no longer be denied that Russia is waging a full war on Ukraine. The absurdity of Putin’s irrational and inhumane actions sometimes overshadow the hurt it causes to the individuals of Ukraine. Ukrainian international student Vitalii Zharinov (19), living in The Netherlands, talks about the situation in his home country.

What is happening in Ukraine right now?

Vitalii: “Putin started what he calls special military operations in Ukraine.” He continues, “basically what Russia wanted to do was set up a Russian government in Ukraine so that Putin could bring back part of his lost empire.” Russia, or the Russian Federation, has only existed since 1991. Before that, Russia was part of the Russian Empire, and later the Soviet Union. In these formations, many autonomous countries around Russia were part of the larger empire. Putin has been repeatedly accused of wanting to re-establish (some of its) imperial power over these sovereign countries.

“Putin is an emperor. He wants the Soviet-times back.” Vitalii says, “he also wants to destroy the democracy in Ukraine, because he sees that Ukraine has the ambition to join NATO and the EU. Ukraine has a democratic electoral system, and our president is doing great. Putin wants to get rid of this and destroy it all.”

And how are you feeling?

“I’m doing better now because this was the first night Kyiv wasn’t heavily bombed. I could go to sleep without having a lot of nerves in my head.” Vitalii tells me that Ukraine in fact has a strong position for negotiations, “if on the first day Russia was in a position to make demands, now Ukraine is in that position.”

Today, on the 28th of February, Russia and Ukraine are in negotiations at the Belarusian border. Talks began with Ukraine calling for an immediate ceasefire and the withdrawal of Russian military forces. The Kremlin is less transparent and has so far not commented on the exact Russian demands.

Did the Ukrainian people see this invasion coming?

“Russia initially invaded Ukraine 8 years ago when they occupied Crimea and helped separatists occupy parts of Donbas (east Ukraine). This war then kind of died out after a few years. People still died and there was still a conflict, but it was a silent conflict. However, everyone understood that at some point this conflict would escalate.”

This point of escalation then came quite quickly. In November and December of last year, U.S. intelligence claimed to have obtained information that Russia could invade Ukraine around January or February of 2022. “I remember seeing this and I straight away stopped reading the Ukrainian news because I didn’t want to see this. I didn’t even want to let this thought come to my mind. It made me very nervous.”

How has the world responded to the war?

“NATO, the EU, and other countries have imposed sanctions. These are big, big sanctions” Vitalii says. Among these sanctions are financial ones that target Russian banks, the stock market, and businesses. Individuals, such as Putin himself, but also other oligarchs, have also been personally targeted with these sanctions. Assets are frozen, travels bans are in place, and savings accounts of Russians in the EU and UK are maxed at respectively €100,000 and £50,000.

Most countries, as well as the entire EU, also closed their airspace for Russian air travel. This means Russia cannot carry out flights to and from these countries, nor cross over it to other destinations. There are also import and export sanctions in place, preventing money from flowing into the Russian economy. “The allies also gave us a lot of armor and ammunition. Helmets, rockets, vests, guns, lots of military aid,” Vitalii continues. “Millions of Euros have been given to us.”

The Ukrainian people seem very resilient and united. Is this something typical?

“Ukraine has always been suppressed by Russia throughout history. Our language has been suppressed, our literature has been suppressed. These frustrations have built up and resulted in the demonstrations in 2014 against the pro-Russian Ukrainian government.” Vitalii adds, “but in all of Ukraine and Europe, Ukrainians now unite. I have never seen something like this.”

To give example, Vitalii explains how civilians participate in the war: “the government shared the recipe for Molotov cocktails, people make these now and throw them at tanks. They also share information on DDoS attacks. Other people report Telegram channels where misinformation is spread. The whole country, every single Ukrainian, is working towards peace.”

How do you stay in contact with family and friends in Ukraine?

“Communication is okay. My friends tell me that sometimes the Internet connection is weaker, sometimes it disappears, but it still works. Sometimes when they have to hide in bunkers there is less connection, but we can still keep in contact.” Vitalii adds: “because Kyiv is not completely destroyed, a lot still works. But in a town in Donbas, Volnovakha, I would say 95% of the town is destroyed now. People are in the bunkers without food or water for days already. For them, it’s much more severe.”

“It’s a very bright future.” Vitalii proudly responds. “I think this will give Ukrainians, and Europeans, this push to understand how powerful Ukraine is. We always hear the narrative of Russia being so strong. They have the second-biggest military in the world. But now we know that the second-biggest military in the world doesn’t equal a powerful nation.”

For Vitalii it’s not a matter of if the war is going to end. It’s more about when. He continues, “when this war ends, I want to believe Europe will help us rebuild the country. Ukraine will join the EU. Everyone now knows what Ukraine stands for, and who we are. The future is looking very bright.”

How can we help?

“Humanitarian and military aid is needed most. This is collected all around Europe. People who really want to get involved can also help coordinate protests. But the bare minimum anyone can do is to stay informed.”

Vitalii continues, “there are also special funds to donate for cultural minorities in Ukraine. Racism is becoming very visible during these times, which is also something that has to be destroyed. We shouldn’t forget that it is not only Ukrainians who live in Ukraine.”

Resources to help Ukrainian minorities.
Petition to close the airspace above Ukraine.
Find a protest near you.
Additional resources on how to help.