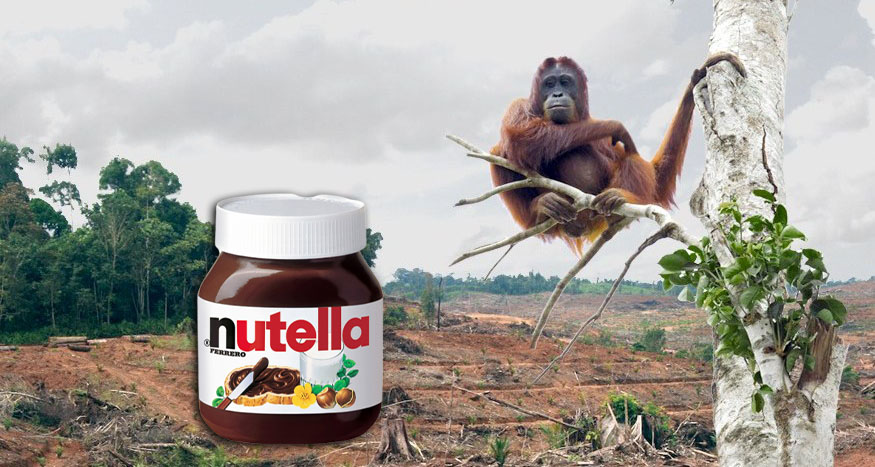 A little spread on your croissant, a delicious smear on a crepe, or just a spoonful straight from the jar. Every year, 11 million jars of this mouthwatering chocolaty delight are sold to consumers all around the world. For reference, that’s a jar every 2.5 seconds. But many of you Nutella-devotees do not realize that one of the main ingredients used in your beloved chocolate spread is actually harmful to the environment.

An important ingredient of Nutella is palm oil. This is an edible vegetable oil that is derived from the pulp of the fruit of oil palms. The African oil palm tree is the primary source of harvest. Large plantations of these trees are located in Indonesia, Malaysia, Thailand, and Nigeria.

Large parts of natural forests are killed to make room for these plantations. Yes, that’s right, and the estimate is that palm oil kills about an area of 300 football fields of tropical rainforest per hour. Not only does that mean millions of acres of natural forests are lost, but there are also numerous species that suffer the horrific consequences of this mass deforestation.

On their website, Nutella claims to produce and harvest sustainable palm oil. Nutella has joined different organizations and partnered up with multiple groups that all ensure sustainability and environmentally friendly palm oil. They claim to protect forests and not cause any more deforestation. They even have satellites monitoring the plantations to see if the suppliers respect surrounding forests.

Besides this great loss of nature and species like the orangutan and elephant, deforestation also contributes to climate change. All these trees store big amounts of carbon, which they release into the atmosphere as CO2 when cut down.

In the last 10 years, the orangutan population has decreased by 50 percent. This is a direct result of habitation loss. And not only the orangutan is dying. The Sumatran tiger – a tiger population on the Indonesian island Sumatra – is now down to only a total of 400 tigers because of the deforestation of their natural habitat in Sumatra.

Clearing about two square acres of forest releases 6,000 tons of CO2. By 2014, Indonesia had already cleared around 15 million acres. You do the math.

In 2011, a small village in Indonesia (Sungai Beruang) was completely destroyed by bulldozers and armed forces of the famous palm oil producer Wilmar and the police. The village stood in the middle of an enormous plantation, and thus had to go. Without any say or compensation, the villagers were chased away from their homes and had their houses completely destroyed.

Oh and if you thought that was bad, get ready for this… Remember the 2015 haze in Southeast Asia that covered a large part of the area in a blanket of smoke? Palm oil companies intentionally start these fires, also called agricultural fires. This is a common practice by plantation owners throughout Southeast Asia. Why? Simply because burning trees is cheaper than cutting them down. Sadly, it’s not only the trees that burn. Innocent wildlife fall victim to these atrocious practices too.

Ferrero, the mother company of Nutella, is a member of the Roundtable on Sustainable Palm Oil (RSPO). Many other companies are a member of this organization too. However, as of 2013, only 35 percent of palm growers were certified by the RSPO. The other 65 percent only paid to be a member but did not actually take action to integrate the RSPO guidelines in their own plantations.

Nutella is not part of this 65 percent and does adhere to the RSPO guidelines. However, the company is still responsible for crimes against nature, wildlife, and people.

What can you do?

Not only Nutella contains palm oil. Many other products we use daily contain palm oil too, such as Dr. Pepper, Heinz Ketchup, Kellogs, Lipton, Orea, and Knorr. Find alternatives to these products so you avoid having to consume palm oil. But no need to go cold turkey on all these products, because yes I get it, some of these products are your favorite snacks. Just read the labels, understand which products contain palm oil, and try to avoid them as much as possible.

Not a lot of people know about the harm palm oil does to the environment, so make them aware. Spread information and educate yourself and others. You can’t enjoy going to the zoo watching tigers and orangutans when on the other side of the world the same animals are dying because of your eating habits.

The misrepresentation of white non-Muslim terrorists in western media

This website uses cookies to improve your experience while you navigate through the website. Out of these, the cookies that are categorized as necessary are stored on your browser as they are essential for the working of basic functionalities of the website. We also use third-party cookies that help us analyze and understand how you use this website. These cookies will be stored in your browser only with your consent. You also have the option to opt-out of these cookies. But opting out of some of these cookies may affect your browsing experience.
Necessary Always Enabled

Any cookies that may not be particularly necessary for the website to function and is used specifically to collect user personal data via analytics, ads, other embedded contents are termed as non-necessary cookies. It is mandatory to procure user consent prior to running these cookies on your website.