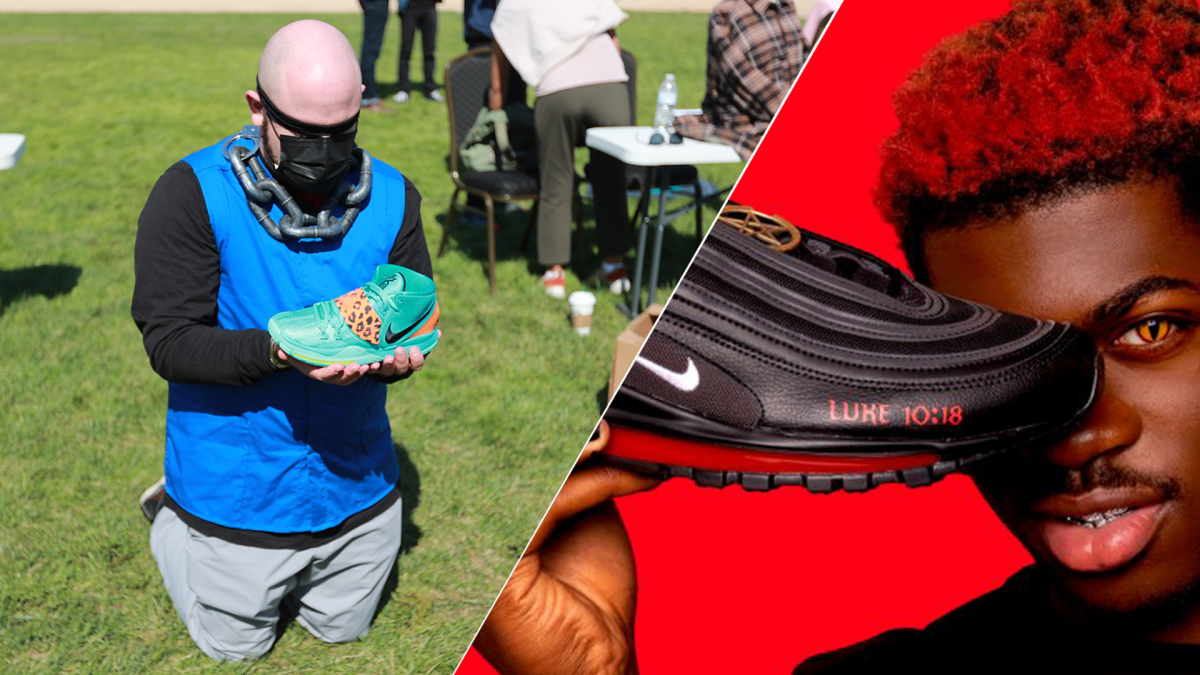 The 21-year-old rapper collaborated with the streetwear label MSCHF to create this exclusive shoe. Only 666 pairs were sold, retailing at $1,018. Each pair contains ‘one drop of human blood’. The ‘satanic’ shoes are part of the marketing campaign for Lil Nas X’s newly released song and video: Montero (Call Me By Your Name). The music video shows the rapper dancing in the devil’s lap upon descending to ‘hell’ from a stripper’s pole.

The song, as well as the music video, received praises from the LGBTQ community as it is considered a very queer-positive project. However, the rapper’s exclusive shoe-line release could not count on the same applause.

In a statement to the New York Times, Nike has said it was not involved in the making of these shoes. In fact, they have now proceeded to sue the creative company behind this project: MSCHF. “We do not have a relationship with Little Nas X or MSCHF,” the company said in their statement. “Nike did not design or release these shoes and we do not endorse them.”

Although a religious and spiritual person myself, I could not care less about the ‘satanic’ references of the music video or shoes. In the end they are just sneakers, nothing more than that.

What does upset me, however, is the distasteful addition of ‘one drop of human blood’. Real or fake, this is a very wrong move and Lil Nas X rightfully so attracted a ton of backlash.

Anyone who does a little digging into Nike’s history of production and supply chain will find out about ‘sweatshops’. These are inhumane factories where workers, sometimes forced or unpaid, are making Nike products under unbearable living conditions. Although Nike claims that this situation has improved, recent sources show how in some shoe factories in China, Uyghur people are forced to work in these factories.

The Uyghurs are victims of ethnic cleansing going on in China, where millions of people are arrested, deported to ‘re-education camps’, imprisoned without reason, raped, or killed.

Nike has said that in response that they are reviewing supply chains in China, and that they would no longer employ workers from Xinjiang (the Chinese region home to the majority of Uyghurs). However, this shows a complete lack of corporate and social responsibility. Nike, as well as many other companies accused of forced labor by Uyghurs, fail to protect their supply chain.

Nike sneakers, among a whole list of other products, can very well be produced by forced labor from enslaved Uyghurs. It is unclear how many people have died so far from this genocide, as China is doing a good job in covering up its tracks. But witness accounts and victim testimonies expose the horrific events that Uyghurs go through.

Adding a ‘drop of human blood’ to shoes that are produced most likely by an ethnic group of people that have fallen victim to genocide is in my eyes not the way to go. Although I understand the message of the song and the overall campaign, the shoes were just a bridge too far.

Considering legal reasons, modifying these shoes and selling them without the corporation of Nike is not okay. Hence Nike is, rightfully so, suing the creative company behind this project. But what matters more here are the moral and ethical values. These are challenged by ironically playing with the idea of ‘blood’, in association with products produced by Uyghur people.

Do Our Favourite Creators Encourage Us to Have Trust Issues?