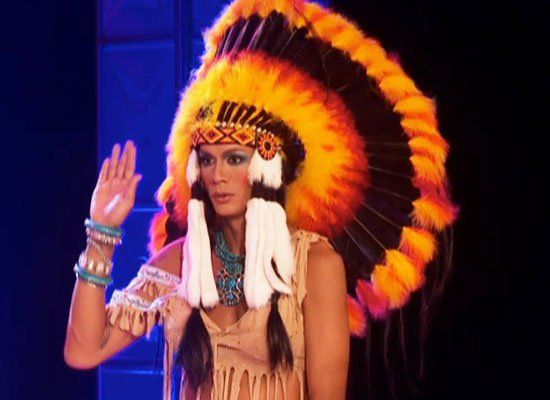 The award-winning reality competition show RuPaul’s Drag Race has been running for more than a decade now. In recent years, the show gained international momentum as several versions and spinoffs appeared in different countries such as Canada and the UK. With more than a hundred contestants so far, it is no surprise that the show has attracted its fair share of critique and backlash. Cultural appropriation-related scandals are present in almost every season of the show.

It’s important to first understand the difference between cultural appreciation, and appropriation. Appreciation is when you genuinely explore and seek to understand, another culture. You do this to broaden your perspective, while always honoring and respecting the beliefs and traditions of the other culture. Appropriation happens when such activities are taken for personal interests, without investing time and energy in thoroughly understanding the culture. When simply taking one aspect of a culture that is not yours, to then use it to your benefit, while neglecting the rest of the culture, is appropriation.

While in this article I do not seek to debate the topic of what is cultural appropriation and what is not, I do however use this concept to discuss the cases of appropriation in RuPaul’s Drag Race.

The culture of drag

Drag is gaining major significance in pop culture, influencing millions of people worldwide. Drag Race taught the world about a subculture that for decades lived an underground existence. Now, with the eyes of the world watching, it is important that the drag community is protected from cultural appropriation.

Drag is a beautiful art that epitomizes and satirizes gender, culture, and society. Often challenging that very heteronormative culture that oppresses members of the LGBTQ community. Yet in some cases, Drag Queens express this in a way that leans more towards cultural appropriation, crossing those boundaries of artistic cultural interpretation.

When this happens, the queens rarely receive any backlash, nor is it discussed on the show itself. Were it to be Beyoncé, Jeffree Star, or Kim Kardashian, the Internet would have been quick to cancel careers, boycott products, and flood the DM’s with hatemail. Yet many cases in which Drag Race showcased cultural appropriation, there is little to nothing about it on the Internet.

Cultural appropriation happens not just on the show, but also outside of it. Season 9 contestant Charlie Hides decided to stop playing one of her characters, Laquisha Jonz, because of a petition that called her out on the blackface and racial stereotypes she portrayed. Hides, however, was still invited for season 9, despite the blackface controversy two years prior that.

90s grunge-inspired queen Adore Delano returned for season 2 of All Stars, a spin-off show where top contestants of previous seasons compete, with a rather controversial look. This hairstyle adopted by Delore is native to the African diaspora and has historically and traditionally been a cultural asset to black people. Rooted in a deep and complex history, such hairstyles ought not to be appropriated for self-interest such as entertainment. The responses of fellow contestants were however only positive, and there is little to no critique about this online.

Delano has been accused of cultural appropriation before, but apparently never took a lesson out of this. In 2015, she posted a picture where she wore a Bindi. This is a colored dot, traditionally worn on the forehead by Hindus and Jains from the Indian subcontinent. When a fan asked her to not appropriate the Bindi, this was Delano’s response, in a since-deleted tweet:

On season 3, contestant Raja Gemini wore a Native American inspired outfit, with a problematic sexualized twist to it. Instead of apologizing, she took to Facebook defending her fashion choices saying: “I travel, a lot more than you … Bite me, get a passport, and gag on my sick ass style.” So far, not taking responsibility seems very on-brand for drag queens…

Then again, on season 9, another drag queen decided to appropriate Native American culture. This time it was up to Alexis Michelle, who decided to even more poorly execute the Native look. What is worse than the look itself, however, were the judges’ comments. RuPaul in his critiques said that the outfit left the judges with ‘reservations’. A very poor joke, referencing Indian reservations. These were historically used to segregate Native Americans, and control the population.

It’s clear that cultural appropriation in RuPaul’s Drag Race is problematic. Yet the backlash online is very minimal, nor do drag queens really take responsibility. I am definitely not saying these queens should receive online hatred. Especially considering that only bullying is a very serious problem. However, I do find it interesting why exactly it seems as if Drag Queens get a hall pass on cultural appropriation.

Normally this is the point where I reach my conclusion, but quite honestly, I do not know the answer to this question. I understand that drag is a form of art, and artistically embodying a character is appreciation. Then again, so is performing, and an Egyptian-looking Katy Perry is still very much cultural appropriation.

The Netherlands and The Coronavirus Response: Too Little and Too Late
How the Instagram 'Name Change Prank' Exposed Racist and Homophobic Users
Truthfully spilling the tea on How to Get Away with Murder: a review
Tags #cultural appropriation #drag race #lgbtq #RuPaul
Life

The misrepresentation of white non-Muslim terrorists in western media