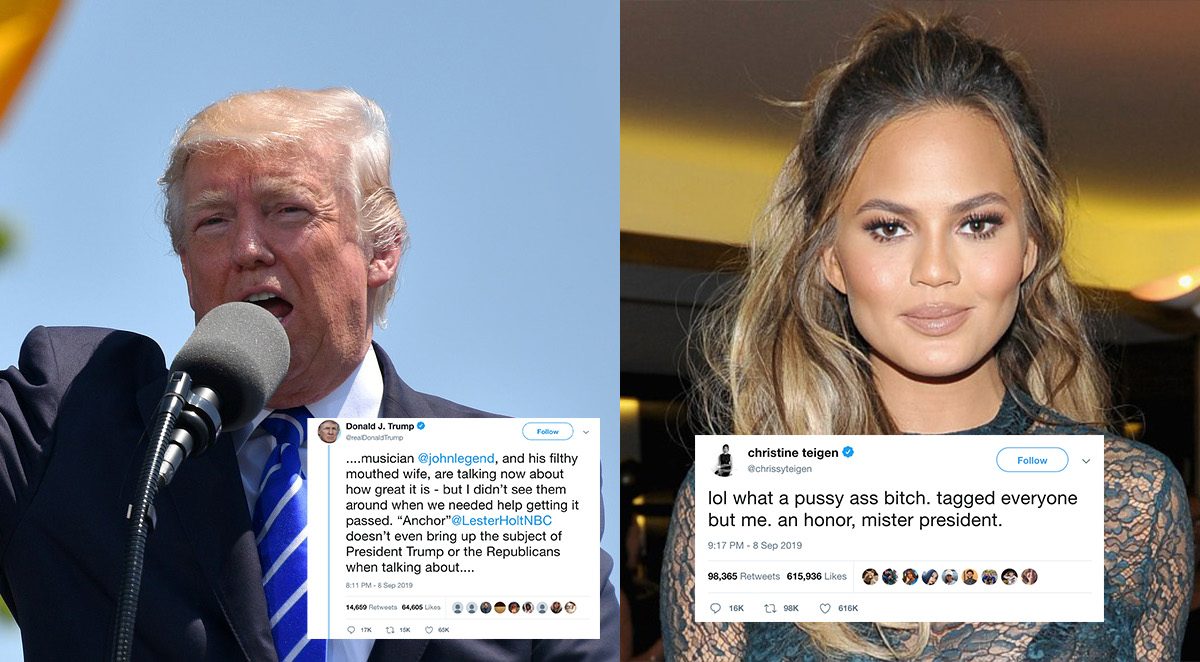 Last Sunday, Chrissy Teigen and Donald Trump were feuding on Twitter. This resulted in a series of Tweets that entered the realm of the Internet, which remind us why you don’t call a woman a “filthy-mouthed wife” (take note Donald).

In line with his character, and to no one’s surprise, Trump took to Twitter Sunday afternoon to insult a handful of people. That on itself is nothing new, however, this time he got some strong words back from Chrissy Teigen. During his Twitter tantrum, Trump bashed singer John Legend for not crediting him during the Justice For All special on MSNBC. Legend was there to talk about the First Step Act and what’s next in the criminal justice reform.

Trump was not happy that he wasn’t mentioned by Legend as the one “pushing so hard for Criminal Justice Reform”. He even went so far to shade Obama because he “couldn’t come close….”

It feels like Trump always has the need to compare himself to others and mention the things he’s accomplished which others couldn’t. He brought Obama into his insult, but surely it didn’t stop there. Trump even felt the need to comment on how “boring musician John Legend, and his filthy mouthed wife” didn’t give him praise for passing the bill. I don’t know about you, but to me, that’s some real small d*ck energy right there.

Now Legend had the perfect way to respond to Trump’s Twitter tantrum tirade which I couldn’t have worded better. And what his Tweet essentially comes down to, is truly sad to think about.

Indeed, Trump spend his Sunday afternoon cyberbullying celebrities because they didn’t credit him for signing a bill. It wouldn’t surprise me if Trump send out that Tweet from one of his (16!) golf courses. But let’s not forget about what really matters at this point.

To golf, or to govern a country?

Mass incarceration of racial minorities is still happening. Crazy psychopaths are still prepping their guns and planning attacks. 44 million Americans still remain uninsured. Another 38 million Americans have inadequate health insurance. An estimated 13% to 17% of Americans live below the poverty line. And probably most pressuring at this point, the Bahamas barely survived the destructive forces of Dorian that raged over the area and caused many to lose their lives.

I can name a hundred things the president could be doing on his Sunday afternoon, yet he chooses to call Chrissy Teigen a “filthy mouthed wife”. Luckily for us, Chrissy Teigen is blessed with an extensive vocabulary that best describes the president, and she wasn’t shy to use it.

These Tweets will go down in history, as a pivotal moment for politics. Because what does it mean to be ‘politically correct’ anyways, when the president of the United States has insulted countless people, countries, and cultures? The field of politics has changed, the rules were broken, and the boundaries have shifted. So why not call Trump a #pussyassbitch?

These events are both the lowest and highest points of today’s politics, and they perfectly illustrate the polarized society that we live in. It is extremely sad for anyone in office to call someone out like that, yet it was also the most entertaining highlight of my day.

Anyways, be sure to use #PABOTUS, #PPAB, and #PresidentPAB (because Twitter did not allow #pussyassbitch to trend, shame on you Twitter).

Hope and Resilience Amid Ukraine Invasion: “Throughout All of Europe, Ukrainians Unite”
“Blood on the Hands” of US Supreme Court as Right to Abortion Is Overturned
Why traditional media won’t cover the Sudan massacre that is happening right now
Tags #chrissy teigen #donald trump #feud #politics #tweets #twitter
Food Bloggers, Life