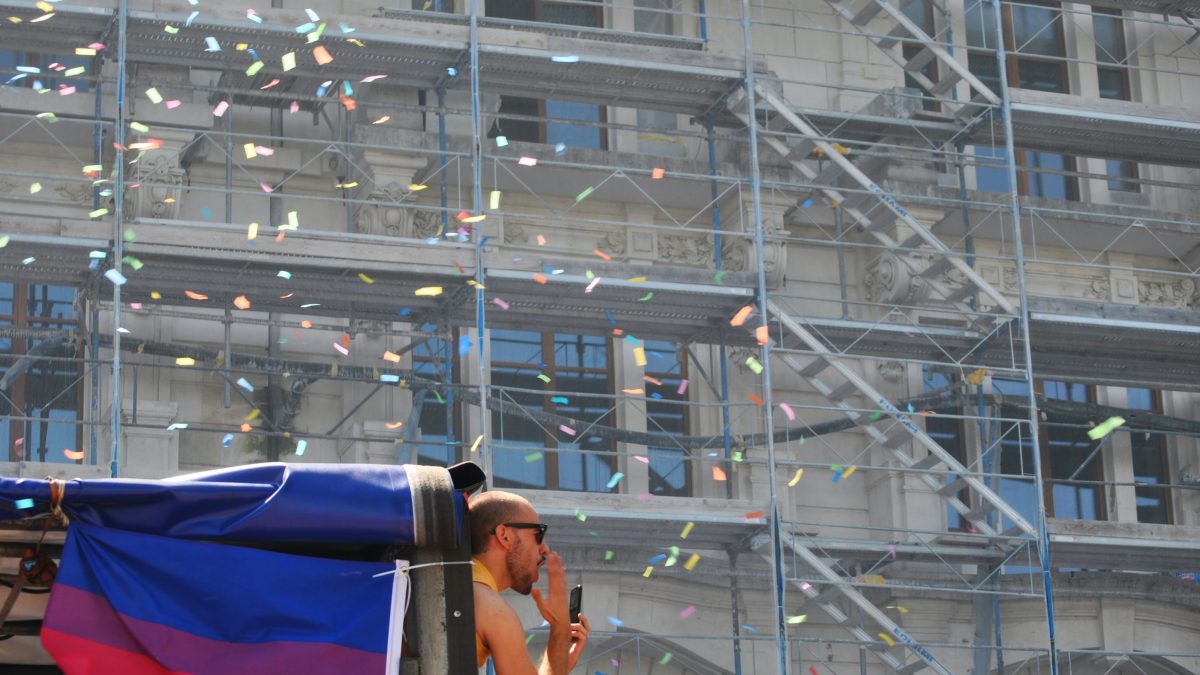 October 11th marks National Coming Out Day. Although for many members of the LGBTQ+ community this is a day to celebrate, some of us are unfortunately not in that priviliged position. On this day, I specifically think of those that cannot safely come out, do not wish to come out, or have come out to only certain people. I also think of those in our community who experience hardships during this process. And in this essay I want to highlight the bisexuals.

The bisexuals, can I say that? Yes, you can take it from a bisexual himself that this is okay to say. But be aware: there are a lot of things you cannot, or should not say when talking about bisexuality. In this very personal essay, I will guide you through some of these conversations to avoid, the hardships I have dealt with by coming out myself, and the lessons that I learned throughout it all. I hope that this serves as a handbook for those questioning their sexuality, figuring out who they are, coming out, staying in, or to all the allies who wish to improve their awareness and knowledge.

Coming out, a process

Just like cooking a good risotto, coming out, and figuring out your sexuality is a process. It takes time, and everyone goes at their own pace. Early on in my own process, I discovered that there are certain expectations on coming out. I felt that I had to rush. The quicker the better. Tell my parents, tell my friends, announce it on my socials, and whatever comes with that. However, I felt highly uncomfortable with rushing this, and I wish I had taken more time to figure out who I really was at the time.

Especially coming out as bisexual can be quite the challenge when rushed. “He’s just gay and this is his first step in coming out”, or “he’s too embarrassed to be gay so he just says he’s bi”. These are a few phrases that I have heard during my coming out process. And quite frankly, these are not uncommon sentences at all. This is called bi-erasure or bisexual erasure. It means that your bisexuality is questioned, ignored, mislabeled, denied, or considered false. And it does not just happen to men. Bisexual women deal with a fair share of bi-erasure as well. Where for men bisexuality is seen as a ‘phase’ before coming out as gay, bisexual women are often labeled as ‘just experimenting’ for fun.

Despite the fact that this is completely false, it can also make the coming out process for bisexual individuals extremely difficult. Knowing that the people around you might not validate your sexuality is frustrating. But bisexuality is not fixed, nor static; it constantly develops. This means that someone who came out as bisexual, can at any point in time choose to define themselves differently. However, it is not up to anyone else but the person themselves to do so.

This is a question I asked myself quite a lot. And I am pretty sure many of you who read this wonder the same thing. The answer is pretty clear: how you define your bisexuality is nobody’s business except yours. You can be whoever or whatever you want, and there is no ‘right’ way to be bisexual. It is a common misunderstanding that bisexuality means equal attraction to men and women. It is also wrong to assume that you cannot be bisexual if you only ever dated one sex. Just like coming out, your sexuality is a process.

A closely overlapping identity with bisexuality is pansexuality. Being pan means being attracted to people not limited of a particular gender identity or sexual orientation. The two overlap in many ways and have nuanced differences. However, someone that is attracted to all genders or regardless of gender might also identify as bisexual. The two are not mutually exclusive.

I specifically say ‘not all’, as there are definitely bisexual people that do match these descriptions. In a society that pushes us into boxes, I think it is important that we leave room for all of us. However, making such statements as a non-bi person contributes to the harmful image that rests on the shoulders of this community.

Why such stereotypes can be harmful becomes clear when looking at the statistics surrounding mental health. A 2018 Stonewall study found that the mental health of individuals is worse for those in the bisexual community. According to this study, 50% of bisexual women and 43% of bisexual men have considered ending their lives. This is significantly higher than the 37% for lesbian women or 32% for gay men.

These statistics matter even more when you consider the volume of the bisexual community. A 2021 survey found that 54.6% of LGBTQ+ adults in the U.S. identify as bisexual. That is more than half of the entire community, leaving all the more reasons to protects these individuals.

What I learned through my own process is that there is simply no ‘right’ way to be bisexual. Bisexuality exists on a spectrum, meaning that each individual identifies, feels, and looks different. I personally do not think of this as a weakness in our community. In fact, the level of diversity and acceptance towards our own is exactly that which defines our strength.

I also learned that dating a man does not make me gay. Just like dating a woman will not make me straight. Similarly, I figured out that I cannot express in percentages which sex I feel more attracted to, but I also learned that some bisexual people can. Coming around to understand all these things does not make it easier to be bisexual. It also does not take away the stigma that rests on our community. But it does bring me a step closer in finding out who I want to be, just like I hope it helps you in figuring out the same.

If you or anyone you know struggles with coming out, mental health, or suicide, please consult the appropriate resources through The Trevor Project.

Normalizing the ‘abnormal’: an interview with activist to be, Berdan Kaplan
Gay Blood is Good Blood
Netflix’s Support of Dave Chappelle Is Disturbing. Here’s Why
Tags #bisexual #coming out #lgbtq+
LGBTQ+, Pop Culture