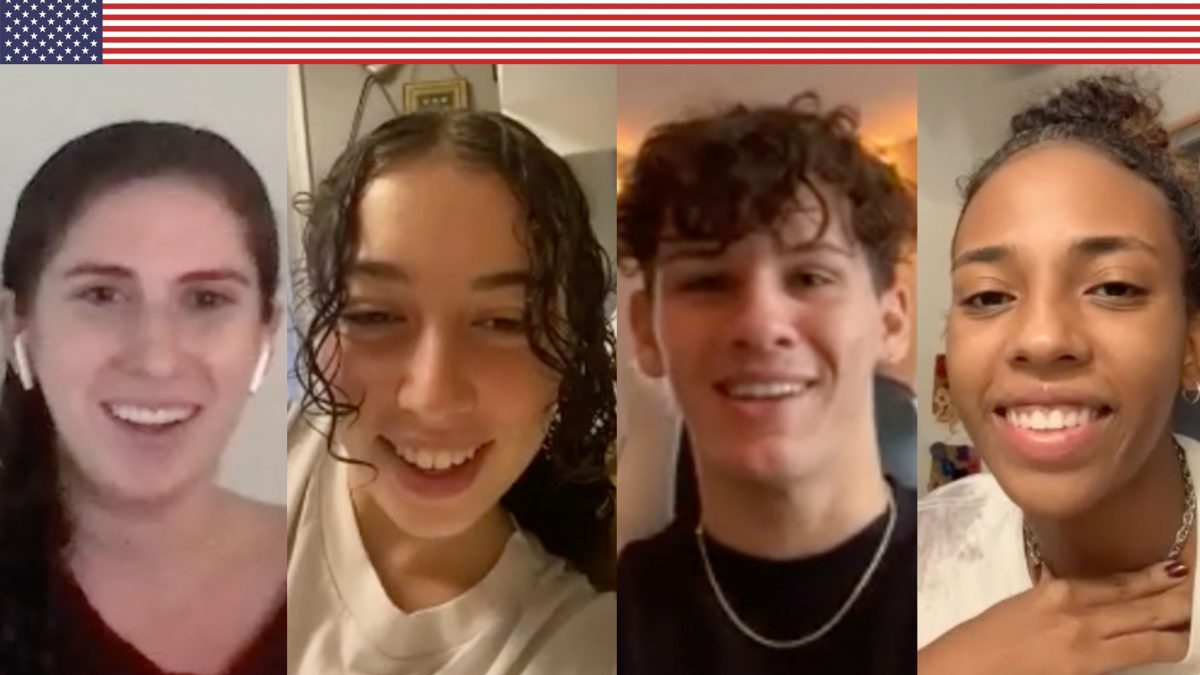 The 2020 US presidential election is just a few days away. I spoke to four American students who are voting this year. Why are they voting, what matters most to them, and how have they experienced the months leading up to this moment?

So far, 2020 has been a very strange year. Worldwide, social and political landscapes changed enormously, and it seems as if more and more people are becoming politically active. A very interesting development especially is the political activism among students.

To see what this generation cares about most, and how they prepared for the election, I spoke to four American students. (An attempt was made to find American students with Republican beliefs, but unfortunately, that proved to be difficult).

Nicky: Why did you become politically active?
Cierra: I never really cared for politics until my senior year of high school. Part of the reasons why I didn’t care for it was because I just didn’t understand anything about it. And now that I do understand how important it is, and seeing the way relationships have changed in the past few months, I became more active. It’s also very personal, with the Black Lives Matter Movement especially. I don’t think it’s right to make something illegal about a person, just because it’s different than you are used to. We should all treat each other the same way.

What about your involvement with the Black Lives Matter movement?
I never really protested until this summer. It definitely drove me to do things like that and invite other people to do it with me. It was kind of a big deal to have my parents come protest with me, and have their support. But also at one point this summer I had to give myself a break because it was emotionally tiring. When I’m on Twitter and everything is about police brutality, and all these graphic videos are shown, it is kinda hard.

What would your ideal America look like?
Not having an electoral college would be perfect. Colored communities are given less of a voice through this system. I don’t understand what land or population has to do with it. Also, caring more about the environment and being less capitalistic. We have this bad culture where we care about money so much that we forget to care about anything else.

Nicky: How did you prepare when you voted for the first time?
Shayna: I feel like because back then it was my first election, and it’s a really big deal in our country to vote, I read through the ballot beforehand, and made sure I knew all the propositions. At that time I was in college and living in a house with my friends, and the elections were a big topic. In terms of the previous elections versus now, because I moved to the Netherlands for school, I feel like I have not prepped as well for these elections.

How is this time different?
I think that this election is so much more important because of the state of the country and the world right now. The elections are so much more important because of what we have experienced this year. So many things have arisen through this, and the division that has been created in this country has grown significantly… the gap is widening, more than it was during the last elections. Specifically the gap between the left and right, and rich and poor.

Are the political topics this year more on both ends of the spectrum?
Yeah, I think that because the country is getting more divided, you really see that on each issue there is quite a difference in standpoints. I think that everyone around, at least where I lived, sees that this division is very apparent right now. I live in a very liberal state, surround by people with the same ideologies. I’m sort of confined to that, which makes it hard to step out of it and look at different points of view. But knowing people on both sides, I don’t feel I would cut a relationship because someone is on one side or the other. Everyone is entitled to their own opinion. When it comes to politics it shouldn’t be the reason to completely eliminate a relationship.

What topics do you find important?
What concerns me most for these elections is health, in terms of COVID, and racial injustice. People haven’t received the support that they needed; the next president needs to look at how they are going the fix this situation. With this evident division of the country, people have different visions on social distancing, wearing a mask, and so there needs to be something put in place where everyone can find middle ground.

Nicky: What was the process like to register to vote?
Joella: It was difficult for me as I did it through the DMV. I had to register to be a permanent resident in the state, and then I could register to vote. For some reason, it didn’t go through, so I had to re-register to vote through vote.org. Our school provided us a lot of resources and pushed every student to vote. It wasn’t just about gathering information, but also in figuring out how to actually vote because they make it so difficult.

Do you feel that this time around the election is more important than four years ago because of COVID-19?
Yeah probably. We’re in the midst of a global pandemic, and whoever the next president will be, is going to determine what the next couple of years will look like. I don’t know if it would’ve been different without COVID happening, considering the Black Lives Matter movement still would have happened anyway.

What concerns you most personally?
The betterment of the healthcare system is something that really needs to be done. Healthcare needs to be for everyone, not just those who can afford it. Also, institutional racism and reproductive rights. Having access to birth control or abortions is important. I think that this pandemic has exacerbated how weak our institutions are to support people who don’t benefit from the systems that are in place.

Do politics and this year’s elections affect you?
As a white person who benefits from the current political system that we have in place, I don’t know if a political candidate affects me personally. I guess as a woman it does, but in every other regard, it probably wouldn’t. But you’re not just living in a world by yourself, there are millions of other people too. Having so many privileges, it is my responsibility to protect the people who don’t benefit from the system that I do.

Nicky: As this is your first presidential election, how did you prepare yourself?
Jacob: On our general election ballot, it says state, local, and federal. There is a lot of things on the ballet. For the state of California, we have propositions on the ballet, such as allowing Uber and Lyft to make their employees full-time employees. Things like those take a lot more research to prepare for. But there is a lot of sources like Ballotpedia where you can prepare yourself.

What concerns you most personally?
Our country has always been racially divided, but other presidents, they always tried to heal and not give light to those who try to divide and spread hate. But our current president dog whistles them. The amount of division and the rise of hate crimes and white nationalists is something that really concerns me. We need a president who will try to heal the nation. Also, the morality and the leadership that America traditionally had, is fading away, and that is something we need to get back.

Do you still trust politics?
No. I feel like Americans don’t trust the political system in general. The system as a whole cannot be trusted. These candidates are supposed to make a government salary, but if you look at their net worth, they are millionaires. Why are they worth so much? If you hold such an important position, unless you made your money prior to office, you should squash these conflicts of interest or you’re not credible.

Do you think voting is important?
Yes, I drill this as much as possible. What really makes a difference in your life, are local and state elections. Those actually matter. The turnout is super low, but the streets that you drive one, the homeless in your city, the water in your city, those are all matters for local elections. To really make a change, you have to vote in local and state elections.

Visit vote.org for more information about the 2020 US presidential election.

“Blood on the Hands” of US Supreme Court as Right to Abortion Is Overturned
The Netherlands Is Facing a Refugee Crisis and It Isn't Just Because of the Numbers
Indonesia’s Silent Genocide in West Papua: Racism, Displacement, and Brutal Murder
Tags #2020 #elections
Pop Culture